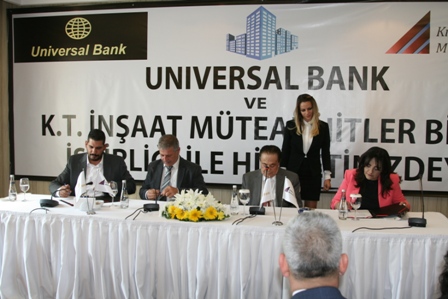 A cooperation protocol was signed between the Turkish Cypriot Building Contractors Association and Universal Bank to create affordable financing opportunities and guarantee unproblematic production to Contractors who have undertaken construction works. The projects in the scope of the protocol,  will not have any problems such as the construction being cut off and the buyer not being able to take the title deed.

A cooperation protocol was signed between the Turkish Cypriot Building Contractors Association and Universal Bank to create affordable financing opportunities and guarantee unproblematic production to Contractors who have undertaken construction works. Only the contractors who are the member of the Association have registered in the Protocol and those who receive housing from these contractors will be able to benefit.

The Signing Ceremony of the Cooperation Protocol which was signed between Cyprus Turkish Building Contractors Association and Universal Bank LTD, was held at the Merit Lefkoşa Hotel on Wednesday, March 29, 2017 at 15.30.   At the Protocol Signing Ceremony, Cafer Gürcafer, Chairman of CTBCA,  and Universal Bank Ltd. Chairman Şemsi Kazım were in present.

Kazım: “Construction sector is needed to develop the country”

Speaking at the signing ceremony, Universal Bank Chairman Şemsi Kazım emphasized the need for the construction sector for the development of the country and stated that they had been paying special attention to the investments that would keep the people in their homeland, especially the young people as the bank, in this context they were excited about the country in signing the protocol with the Contractors’ Association.

Kazım emphasized that Universal Bank, which develops with the confidence of the public and grows in stability, gives priority to the economy in all conditions and that it appreciates the Contractors’ Union for the contribution they make to the country.

Gürcafer: “ The completion of the housing will be guaranteed”

Providing detailed information about the signed protocol, Mr. Cafer Gürcafer, Chairman of the CTBCA, mentioned the negativities experienced in the sector and noted that many problems that have been experienced in the past with this project will be removed.

“Within the scope of this protocol, there will be no problem that no one will buy the title deed of the house bought, and there will not be a problem like being left half finished constructions.     The completion of the construction will be guaranteed” said Gurcafer and informed, the protocol project, which will be realized soon, will be the first concrete step in the life of a pilot project.